Imminent Coming into Force of the Paris Agreement: Implications for Africa 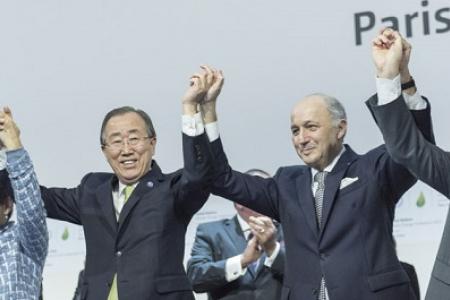 Addis Ababa, Ethiopia, 30 September 2016 – The Paris Agreement on climate change is set to go into history as the fastest international agreement to be ratified. This landmark agreement, reached at the 21st Conference of the Parties to the United Nations Framework Convention (COP21) in Paris in December 2015, aims to limit the increase in the global average temperature to “well below 2°C above pre-industrial levels” and to pursue efforts to “limit the temperature increase to 1.5°C above pre-industrial levels” in this century.

The Paris Agreement, the successor to the Kyoto Protocol (that comes to an end in 2020), takes effect from 2020 or sooner if the conditions of Article 21 of the agreement which states that “…the Agreement shall enter into force on the thirtieth day after the date on which at least 55 Parties to the Convention accounting in total for at least an estimated 55 per cent of the total global greenhouse gas emissions…” ratify the agreement.

The basis of the Paris Agreement is the Intended Nationally Determined Contributions (INDC) submitted by all parties in the lead up to COP21as their national contributions to limiting global greenhouse gas emissions. INDCs became Nationally Determined Contributions (NDCs) subsequent to COP21. Once a party ratifies the Paris Agreement, its coming into force means that the Agreement and all its provisions - including NDCs - becomes legally binding to that Party.

Subsequent to COP21, the African Climate Policy Centre of the United Nations Economic Commission for Africa analysed the INDCs of all Africa countries and determined that that there are still a number of challenges with the submissions of many developing countries, including: vagueness in their mitigation ambitions and adaptation aspirations; lack of cost estimates for achieving their adaptation and mitigation goals; no indication of sources of funding (conditional, unconditional, private sector, and/or public) for both mitigation and adaptation; pledged emission reduction commitments despite not having up to date national GHGs emissions records; mitigation commitments that exceed current level of emissions; and lack of coherence between some of the INDCs and national development plans and strategies.

“The unprecedented momentum for ratification of the Paris Agreement present an urgent opportunity for African countries to revise their INDCs with a view addressing the above issues and strengthening their ambition levels where appropriate, says Dr. James Murombedzi, ACPC Acting Coordinator. “This will ensure that the implementation of the Paris Agreement supports and accelerates the Continent’s sustainable and inclusive development agenda as framed by the African Union’s Agenda 2063 and the UN 2030 Agenda for Sustainable Development.”

As never witnessed before, barely five months since the UN Secretary General, Ban Ki-moon, opened the agreement for signature in April 2016, 61 Parties (with Mali being 61st Party) representing 47.79% of global emissions had already ratified the agreement by 23rd September, 2016, with many more Parties (such as EU, Germany, Australia, Canada, UK, France, South Korea and Jamaica) having made pledges to ratify the agreement very soon.

With India set to ratify the Paris Agreement on 2nd October, 2016, the emissions coverage will reach 51.59%, meaning that with the other imminent ratifications the 55% target is very likely to be reached in the first week of October, 2016. This means the Paris Agreement is almost certainly going to come into force during the COP22 in Marrakech, Morocco, scheduled for 7 – 18 November, 2016.