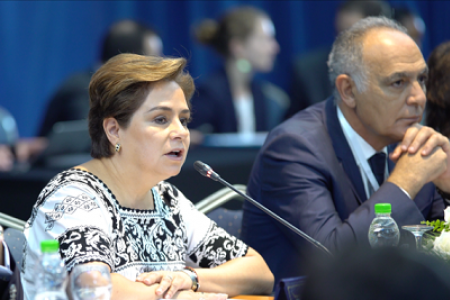 COP22 President, Salaheddine Mezouar, who made the disclosure on Saturday in Marrakech at a press conference held in the company of UNFCC Executive Secretary, Patricia Espinosa, disclosed that the development constituted an important political signal in the fight against climate change.

The press conference was held to mark the halfway point of COP22 and to take stock on progress made at the Marrakech Climate Change Conference ahead of the High-Level Segment scheduled to take place on November 15, with an opening ceremony in the presence of His Majesty (HM) King Mohammed VI of Morocco, UN SG Ban Ki-moon, scores of Heads of State and Government and participating delegations.

The opening day of the High-Level Segment will include the reading of the “Call of Marrakech”, which is a call to action that is a result of a highly inclusive consultative process among Parties.  November 15 will also mark the first session of the Conference of the Parties serving as the meeting of the Parties to the Paris Agreement (CMA1).

Mezouar called on all remaining parties to follow suit as soon as possible in order to keep up the important climate action momentum. Nigeria has said that it will ratify the agreement next week.

At the halfway point of COP22, slated to wrap up on November 18, the COP22 President spoke with a positive tone, saying, “Negotiations are going will and are exemplified by a highly inclusive and consultative process among all Parties.”

He underscored positive actions taken by civil society in the lead up to and during COP22, pointing to the remarkable commitment and engagement of the youth population, who participated in the Conference of Youth (COY12) in Marrakech from November 4 to 6, and who have been highly active in both the Blue and Green Zones during the first week of the COP.

The COP22 President also pointed to the fact that progress is being made on the Paris Agreement rulebook and that important announcements would be made next week regarding capacity building for developing countries. He also underscored the importance of making headway during the UN Climate Conference on the question of climate finance especially as it relates to matching bankable projects with climate funds and mobilising private sector finance to leverage public money.

Following several questions from journalists on the U.S. Presidential election results, the COP22 President answered, “The American peopled are very engaged and committed to the fight against climate change.”

In her remarks, Ms Espinosa thanked Mezouar for his leadership as COP22 President, disclosing: “More than 90 countries have moved from Intended Nationally Determined Contributions (INDCs) to formal Nationally Determined Contributions (NDCs). This transition has happened in record time which confirms the world’s commitment to addressing climate change.”