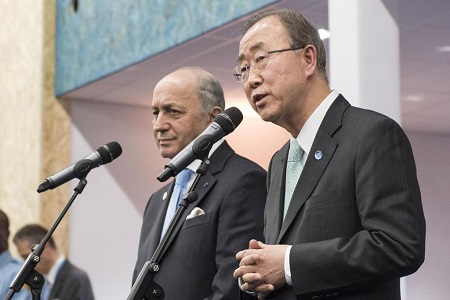 On what should be the last day of the conference, as often happens, we are going to go beyond the planned timeframe due to a number of outstanding issues where agreement has not been reached. The nine groups mentioned reported to the presidency on Wednesday night and on Thursday another version of the negotiating text, based on these reports, was circulated. There have been continuing negotiations since Wednesday evening, through the night until early Thursday morning. They began again continuing through the night on Thursday.

There has been progress in some areas but major issues are still unresolved. The whole question of differentiation among parties, between developed and developing countries, those that are emerging economies and those progressing less well. There is a persistent problem in trying to make a distinction in line with what the convention has already established in terms of historical responsibility – that the countries responsible for causing global warming should take the lead. It’s still not clear what contributions the developed countries should make.

The developed countries do not want to commit strongly to providing financial support now it’s been expanded into what’s called Means of Implementation –  not only finance but technology development and transfer as well as capacity building. The developing countries are saying they need the means to implement what is required of them in the treaty. Their position is clear: in the process of development, they do not want to devote their resources to resolving problems they didn’t create.

The fact is that promises made in the past have not been fulfilled – and so developing countries are now looking for a clear commitment that the finances to be provided should be adequate, predictable and should be delivered. Until that’s resolved we’re going to have serious and unresolved issues.